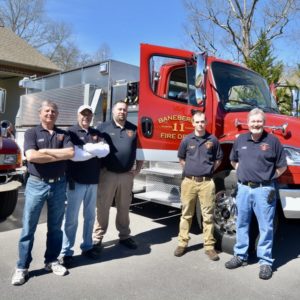 The Baneberry Volunteer Fire Department, established in May 2006 by City Ordinance 206-1, (and amended by City Ordinance 216-1) is duly authorized by the Tennessee State Fire Marshall to serve the City of Baneberry and a county area in a five (5) mile radius of the fire department building.

As an on-going effort to provide enhanced fire protection for the residents of Baneberry, the City Commissioners purchased a fire engine and authorized the construction of a fire station to be owned and operated by the City of Baneberry.

The fire department objectives include:

Open Burning:  Prior to burning on your property or elsewhere within the City limits, refer to the City’s Open Burning ordinance and webpage.

Medical Records – For your personal use, the Fire Department has provided an Emergency Medical Information Sheet.  You could carry completed copies of the form in your purse or wallet and maintain copies where emergency personnel are most apt to locate it during an emergency.

With regard to identity theft, users should make personal decisions about which data to include or exclude on the form.  Use of this form is entirely voluntary.

Unless the situation demands,
do not call E-911.